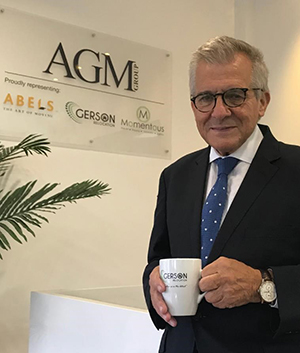 Paul Evans is a personality who has become synonymous within the international moving industry for building and developing some of the best known and loved brands within the community and his focus on Europe. A fierce advocate of quality and standards, Paul has helped support careers of others and saved jobs within companies that had previously struggled, and understands the importance of strong relationships as being core to the international moving and relocation industry’s success. One way that he shows how much he values those around him is the fact that he has never forgotten a birthday.

Paul started in the industry in the Sixties by establishing himself as an “Owner Operator” company. He personally obtained a CPC license and a Class 3 license for driving large pantechnicon vehicles overland to destinations including Jeddah, Tehran and Istanbul. As a driver he was ambitious and built his business, working continuously to provide transport services for the international movers.

Throughout his career, Paul has been focused on building the reputation of the international moving and relocation industry across the Europe. In 1973, Paul founded and managed Trans Euro Worldwide Movers jointly with Richard Levine and began operations with a staff of three. Paul’s drive for excellence meant that he was continually innovating. He developed Europe’s first fire-safe warehouse in London, and established some of the key best practices now commonplace within the industry, including tracking and tracing software and pan-European services.

In 2005, Paul purchased the Interdean Interconnex which employed around 3,000 employees. He saved the company by selling the U.S. business, which still trades as Interconnex, and refocusing the Asia offices on the pan-European market. Paul assembled a new senior management team to rebuild the brand and to secure jobs of the company’s employees. He invested in people, processes and technology with a continued focus on quality, securing industry awards and FAIM ISO accreditations, and retired as Chairman of Interdean in May 2012.

In 2014, Paul purchased Momentous Moving Excellence, Abels Moving Services, and Gerson Relocation. Bringing them under the brand of AGM Group, Paul established a business where the brands focus on their core capabilities and work in harmony. Today, AGM Group businesses employs 200 staff and are key supporters of innovation and service excellence within the international moving industry. In 2018 Paul transferred 25% ownership of AGM Group’s businesses back to his employees under an Employee Benefits Trust, meaning that every employee is a part owner/partner in the business, and their actions have a direct impact on the success of the company they have a stake in.

Outside of work, Paul is most notable for his work in supporting Marie Curie Cancer Care, a UK registered charity which provides care and support to people with terminal illnesses and their families. Paul has supported the charity for over 25 years, raising awareness and donations for its patients. Paul is also a personal donor and is known for his hands-on approach from serving on a committee for the charity and even personally going out to collect money and sell the tie pin badges to the public in public train stations. Through his work for Marie Curie, he has also actively engaged his employees and clients in supporting fundraising activities. Between the years of 2007 and 2012, Paul ran the International Moving Rugby 7s tournament to raise money for the charity., in which international moving companies from across the UK and Europe took part and together raised funds for the charity.

Over the years, Paul has developed strong relationships within the international moving and relocation community. He is known for his positive approach and keeping the spirit of international moving alive. On a personal level, Paul has helped employees and industry friends to launch new companies, provide financial support and also help with medical treatments.