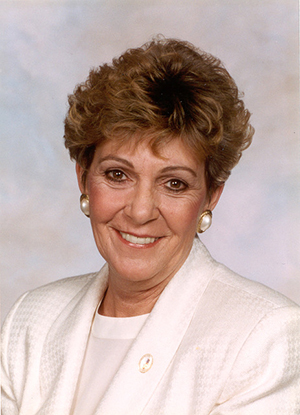 During her thirteen (13) years at Interstate and her more than twenty-five (25) years in the moving and storage industry, Estelle was known as an industry leader in the areas of loss and damage prevention, claims adjudication, claims management and customer service. She was also known for developing and implementing several programs and tools which are still in use today to assist and educate those working to mitigate, settle and appeal claims.

Estelle enjoyed life as the wife of a career Army -officer and mother of three children. In 1977, she began her career in the moving and storage industry when she joined Interstate’s Claims Department to settle claims for military personnel and their families and further develop her analytical and customer service skills.

While at Interstate, Estelle developed an internal damage claim loss and prevention program and authored the company’s first formal claims training manual. The program she developed is still in use today, in part, by the American Moving and Storage Association (AMSA) in the training of claims analysts. During her tenure at Interstate, Estelle was promoted to Customer Service Manager and later as the company’s first female Vice President.

In addition, she served on the Board of Directors of the Claims Prevention and Procedure Council (CPPC); was a member of the Military/Industry Claims Advisory Panel for the Household Goods Forwarders Association; and served as Secretary of the Traffic Club of Washington, DC.

In 1989, Estelle accepted a position at the National Moving & Storage Association (now the American Moving & Storage Association), where she served as an expert claims witness for the military, coordinated the production of the association’s Claims Training and Reference Manual, and conducted in-depth training seminars and programs for industry claims analysts, moving company executives, state associations and other groups.  In the early 90’s, Estelle became the first woman to serve as Vice President for NMSA, overseeing operations, training and development, and serving as general manager of the association in the president’s absence. She was also responsible for monitoring military affairs issues and the advertising sales of NMSA publications.

Additionally, Estelle authored the first Letter Writing Manual for Claims Adjusters and developed the first Claims Analyst Certification Program. She also spearheaded the coordination of the NMSA’s Nationwide Repair Services Directory. Estelle’s expertise and achievements in the area of claims have had a lasting impact on the relocation industry. This is evidenced by the programs and publications she produced throughout her almost 30 year career. In addition, Estelle was a mentor to countless professionals in the household goods industry; her door was always open and she went above and beyond to help others succeed.