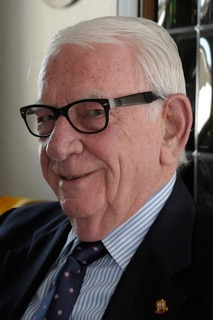 James W. Westbrook was born on March 21, 1933, in Omaha, Nebraska. After a time in Montana, he moved to Los Angeles, California, at the start of World War II. He served four years of active duty in the U.S. Air Force. During his Air Force Reserve term, he started in household goods moving as an owner-operator for Imperial Van & Storage in Long Beach, California. His career has included positions as warehouseman, dispatcher, manager, and general manager at Imperial Van & Storage.

After his years at Imperial, he worked for Smyth Worldwide Movers and transferred to its European headquarters in Koenigstein, Germany. Jim formed Apache Overseas Removals & Forwarding in Twickenham, England, in 1978. He joined Chipman International for a time before forming Sentinel International Forwarding in 1989. Sentinel has been a governing member of IAM since its inception.

Jim returned to Germany in 1991 to join Interdean International as U. S. Military personal property advisor. He retired from Interdean in 1999 and returned to the U. S. to rejoin Sentinel, of which he is currently the owner and president.

He was the German/European Representative for the Household Goods Forwarding Association of America (now IAM) for more than five years and also served as the President of the German chapter of the National Defense Transport Association.  Jim has served on numerous committees and currently serves on the IAM Ethics Council.

Jim is a registered Veteran Member of IAM and has been a member of the Household Goods Forwarders Association of America, Inc. (now IAM), in one capacity or another, for more than 50 years.

Jim is married to Heike and has three children, seven grandchildren, and three great-grandchildren. He currently lives in Lilienthal, Germany.