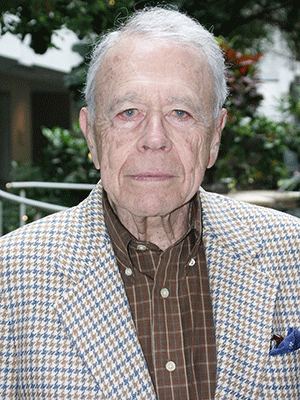 Alan was born on November 23, 1921 in New York City, the only child of Faye and Samuel Wohlstetter. He grew up in the Hotel Wales at 92nd and Madison, a hotel that his father owned and managed. To give young Alan some perspective, his mother once invited children from the local orphanage to his birthday party and gave them all of Alan’s presents.

Alan enrolled at Harvard at the age of 16 and enlisted in the Navy during World War II. He was posted to a Mariner PBM, the American patrol bomber flying boat. Little did he know that transportation would become the focus of his legal career. Alan wore his Navy uniform to his Harvard Law School interview, and was accepted on the spot.

A law review article Alan wrote on the airline industry attracted the attention of Henry Friendly, the General Counsel to Pan Am Airways, who went on to serve on the Second Circuit Court of Appeals. Alan had a job with Judge Friendly when he graduated from Harvard Law School, which at times took him before the Federal Maritime Commission in Washington, D.C.

It didn’t take long for Judge Friendly to receive a call from the Commission explaining that they wanted to set up a trial section, and they wanted Alan to be part of that effort. Alan spent 18 months traveling the country litigating cases for the Commission, establishing precedent regarding the regulation of shipped goods for the remainder of the century.

Around that time, Alan met Joyce Bauman, a red-head from Memphis with a warm southern accent, charm and a flair for making social gatherings into parties. Alan’s mother not only loved Joyce; the two of them knew Alan would marry her before Alan did! They were married on June 4, 1950 in Memphis, and then settled in Washington, D.C.

Alan was quickly lured away to the private sector, joining Bill Denning in a law partnership where they split everything right down the middle. Their partnership lasted for almost fifty years. In 1961, Alan met with a handful of shipping clients and formed the Household Goods Forwarders Association – now known as the International Association of Movers. IAM now consist of 2,000 members located in over 170 countries, all of whom are dedicated to the transportation of household goods and related commodities by ocean carrier, air, rail and truck for members of the Armed Forces, numerous Federal civilian agencies, and commercial concerns.

Since Alan often negotiated with the Armed Forces over appropriate ocean rates, it was rumored that the Armed Forces were willing to chip in for his retirement party. For over 25 years, Alan served as General Counsel of the Washington Chapter of the National Transportation Association, while serving as special counsel to over 35 household goods movers.

Alan and Joyce have three grown children: Priscilla (Penny), Alan F. Wohlstetter, Jr. (married to Cheryl Rice) and Ann (married to Lee Tsangeos), who were raised in their home in Chevy Chase, MD, where Alan lived until Joyce’s passing. Alan was quite proud of his six grandchildren. Alan moved to Foulkeways outside of Philadelphia on New Year’s Day in 2009 to be closer to son Alan, Jr. and his family.