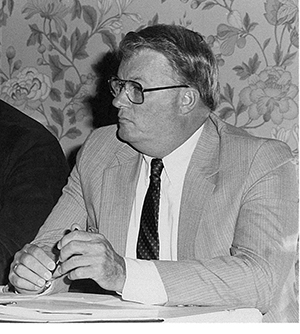 David W. McCreight, Eastern Region Vice President of the Household Goods Forwarders Association of America, Inc., was born in Ruby, South Carolina, on November 10, 1936. Anyone familiar with his hometown will understand how he became involved in the transportation business, for Ruby is a trucking center in the southeastern part of the United States. He attended Ruby Public Schools before attending the University of North Carolina, in Chapel Hill, N. C.

Dave began his trucking employment with E. L. Long Motor Lines, Inc., in November, 1957, as Assistant Terminal Manager, Florence, South Carolina. After this firm was purchased by Overnite Transportation Co., effective January 1958, he continued as Office Manager at Florence, and was later promoted to Sales Representative.

In May 1960, Dave McCreight was transferred to the Home Office of Overnite in Richmond, Virginia. Here he worked first in the Traffic Department and was later assigned to sales duties within the Richmond Terminal operation.

In January 1963, he was transferred to the Greensboro, N.C. area to handle sales duties for Overnite in Greensboro and Burlington, N.C. In March 1964, Dave went to Norfolk, Va., with Overnite Transportation Co., to handle Import· Export and Military Sales.

In March 1965, Mr. McCreight resigned from his position with Overnite lo take a position with Universal Van Lines, Inc., a member of the Household Goods Forwarders Association, in Norfolk, Va., as General Manager, SalesTraffic-Overseas, which was later changed to General Manager, Overseas Division. In January 1968, Dave was promoted to Vice President, Overseas Division. During Dave McCreight's transportation employment, he has been a member of the Richmond, Va., Traffic Club; Capitol City Traffic Club, in Richmond; was a member and served on the Board of Governors of the Greensboro, N.C. Traffic Club and the Burlington, N.C. Traffic Club, plus having served the latter as its 2nd Vice President. He was a member of the Norfolk-Portsmouth Traffic Club, and served as a member of its Board of Governors. He also served on the Committee for Inland Transportation of the Hampton Roads Maritime Association.

In addition to his Vice Presidency of Universal Van Lines' Overseas Division, he was President of D.R.B. Transportation Co., Inc., a Norfolk, Va. based truck and equipment leasing firm. Dave was married to the former Suzanne Caravati, a native of Richmond, Virginia, in 1961.