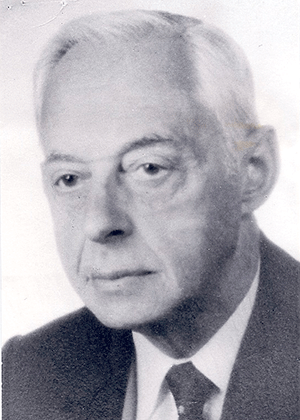 If Richard Sommer wasn’t the first Associate Member of the Household Goods Forwarders Association of America (now IAM), he certainly was among the first. He and his organization were active in the industry as a local agent, port agent, and general agent from the beginning. Sommer attended every HHGFAA annual meeting during his tenure and was enthusiastically committed to the association’s goals, including supporting The Portal with ads for his company, Wilhelm Rosebrock, GmbH & Co. A native of Bremen, Germany, Sommer joined Wilhelm Rosebrock in 1934 as a partner and co-owner. Like much of Bremen itself, the firm was badly damaged during World War II, and Sommer and his partner, Fritz Rosebrock, began to rebuild the company. In the 1950s, Sommer established Rosebrock as one of the first companies to provide services to many of the top American forwarders participating in the U.S. military’s personal property shipping programs in Germany. For over 60 years, Sommer dedicated his life to the needs of the American ITGBL industry and the evolving needs of the U.S. military. Few people have contributed more to the successes of both his company and to the U.S. military shipping programs in Germany and Northern Europe. Today, Richard Sommer is remembered as a leader and major contributor to the advancement of the international moving business. His commitment and creative abilities positioned his company as one of the key local, port, and general agents in Northern Europe. In 1995, at the age of 86, Sommer succumbed to a heart attack at a German railroad station, while on a business trip.