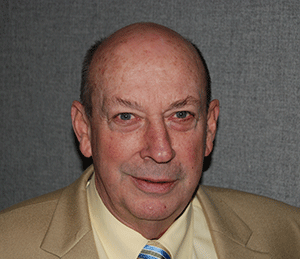 George Fouch has been active in local, intrastate, interstate, and international moving for the U.S. military as well as the corporate and private sectors for over 50 years. During that time he earned a reputation as a leader and innovator, contributing to many advancements in the industry. Born in California and educated in Washington State and Oregon, Fouch graduated with honors from the University of Washington in 1962. During his college years, he worked summers at Smyth Worldwide Movers in Seattle as a packer, driver, and warehouseman.

After graduating from college, he joined the U.S. Army, serving two years active duty and four years in the reserves. Following his discharge from active duty, Fouch took permanent employment with Smyth Worldwide Movers, advancing his career by working in all branches and divisions of the organization and eventually rising to an executive position. In 1979, Fouch and his partner, David Dack, founded Rainier Overseas Movers, a Mayflower Van Lines agent that eventually became one of the most successful international forwarders on the U.S. West Coast. During his tenure at Rainier Overseas, George Fouch served for 15 years on the management board of directors of the Washington State Movers Association and led the association for one term as president.