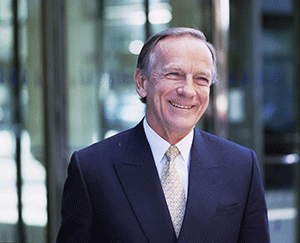 Jim Thompson entered the moving business in 1963 when he was employed by Intercontinental Transport in Yokohama, Japan, at age 23. His father, James Thompson Sr., had been employed in the company’s Redondo Beach, California, facility since 1959. Both Jim and his father participated in HHGFAA/IAM from the early 1960s.

In 1965, Jim Thompson formed a company in Japan called Transport Services International with only US$1,000 in capital. The business focused on the corporate market in Tokyo but later was able to win some U.S. military packing contracts in Japan. The total sales volume in the first year was $99,000 but it  doubled every year, reaching $900,000 by the end of 1969.

Jim opened a second office in Hong Kong in 1970, partnering with the Kriegsman family of Pekin, Illinois (Mayflower agents). The company was renamed Crown Pacific. The Hong Kong office was immediately successful and the expansion continued to Singapore, Indonesia, and other Southeast Asia locations. In the 1970s Jim’s father retired and the Kriegsman family sold their interest back to Jim.

Expansion of the business continued over the following 30 years and today the Crown Worldwide Group has established itself in over 225 locations in 55 countries throughout the world.  All Crown operations are wholly owned. The Crown Worldwide Group employs over 4,000 full-time staff around the globe, as  well as a large number of contracted personnel.

Jim Thompson graduated from San Jose State University with a B.S. degree in Aeronautical Engineering. He came to Asia soon afterward and has lived in Japan and Hong Kong ever since, with his wife Sally. His two children, Jennifer and James Jr., work for Crown New York and Crown Beijing, respectively.

Mr. Thompson serves as chairman or as a board member of numerous charitable organizations. His particular interests are charities related to children, cancer, and education. In 2003, Mr. Thompson was awarded the Gold Bauhinia Star, Hong Kong’s second highest award, by the Hong Kong Government. It recognizes persons who have given very distinguished service to the community or who have rendered public or voluntary services of very high merit.