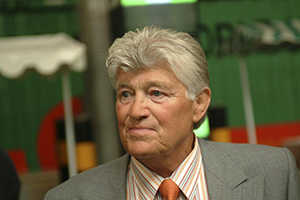 As the founder of the Gosselin group of companies, the late Dolf Gosselin played a major role within the industry over the past 50 years. Now prominent throughout Europe and Central Asia, Gosselin’s companies have had a massive impact on both the commercial and military sectors of the moving business. His influence was also felt within IAM, as Mr. Gosselin encouraged his employees to assume a variety of leadership posts throughout the Association and contribute both time and energy to its success.