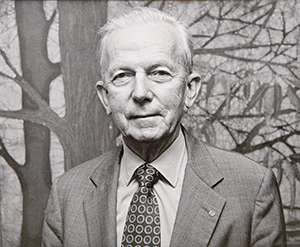 A native of Dresden, Germany, Paul Richard Klien moved to Brazil in 1934 at the age of 19. His first job was in São Paulo, working in the family chocolate factory. Later, he attended Brown University in Providence, Rhode Island, where he volunteered to join the United States Army.

After the Second World War, Paul returned to Brazil and met his future wife, Edith, daughter of Austrian Leopold Joseph Fink, of L. J. Fink Cia. Ltda (later named Transportes Fink S.A.), the first international forwarder in Brazil. At the time, Edith was responsible for the postwar donation packages sent to Germany with food and clothing. Mr. Fink provided large wooden boxes to facilitate shipping them as consolidated cargo and contracted forwarders in Germany to deliver the items, thereby making the donation parcel business a success.

As an employee of Transportes Fink S.A. in the early 1960s, Mr. Klien was a key player in the move of the federal government of Brazil from Rio de Janeiro to Brasilia. It was at this time that President Juscelino Kubitscheck himself invited Paul to become a Brazilian citizen.

Excellence was Mr. Klien’s first and foremost concern. He trained his staff on everything from answering phones to packing, even creating a "packing school." His wife, Edith, was responsible for customer relations and Mr. Klien called clients on a daily basis to check on Fink’s quality of services. His training texts are still being used at Fink today.

Mr. Klien was one of the founding members of the Latin American & Caribbean International Movers Association (LACMA) and president of the working group that developed the statutes that have been its bedrock. Envisioning an association where Latin American movers could join forces to pursue common interests, he was elected the first president of LACMA in 1969.

He also assisted the Brazilian Ministry of Foreign Affairs by translating Brazilian customs regulations for incoming shipments into German and English and circulating them among embassies, transnational companies and chambers of commerce, creating good will and expediting customs clearance through proper documentation.

In the early 1970s, Mr. Klien felt that Brazil needed a financial institute to help bring the country into the rank of developed nations. Although he was not a financial executive himself, he founded IBEF, the Brazilian Institute of Financial Executives.

During his career, Paul was awarded the Medalha de Mérito Mauá from the Brazilian Ministry of Transportation in 1989 for his contributions in the transportation field, and the Ordre de Léopold from Belgium for his support of Belgian products in Brazil.

Mr. Klien was instrumental in the modernization of Brazil. With the help of his wife, sons and daughter, Fink ventured into other areas of business such as Ro/Ro and container shipping via Transroll Navegação S/A; record and file storage with Memoteca Fink; and container and vehicle port terminals through Multiterminais and Santos Brasil.