Various TSPs asked IAM for insight to questions stemming from the TRANSCOM announcement that they intend to start a new CSS process by the end of this month. We engaged TRANSCOM for insights into your questions, and received the below replies to those questions:

Answer:  29 April is the plan based on successful testing leading up to that date. This may change due to our combing 3 surveys into 2 surveys.  Should not be a long delay (if needed). (Notice it appears TRANSCOM will issue two surveys now, instead of the three they had originally stated).

Answer:  No, surveys not benefiting from the new process will continue be completed by the customer in DPS (I think my question was unclear; but what I take from this is for the new CSS process, the help desk and DPS will not be used; for surveys happening before 29 April, they will continue to be used as they currently are.)

Answer:  We do expect to see a lower survey response rates during the transition for the Month of May; however, we will continue to see responses coming in for customers who have open surveys in DPS prior to the 29 April release.  In addition, we could see responses for shipments in an in-transit status or later and that deliver during May (these are immediately eligible for completion in DPS).  More important, there is little to no potential impact on a TSPs statistical validity for the next performance period (1 August performance period) because the affected 12 month data pull timeframe for that period covers all surveys from 1 June 2021- 31 May 2022.  As a result, we expect minimal impact to statistical validity due to this transition.  Any TSP lack of statistical validity will be handled in the same manner as always, per the DTR Part IV Chapter 403. 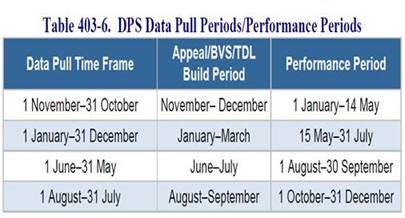 Answer:   We are working on a potential way to provide access to partial survey responses.

Answer:  More than happy to use existing meetings and venues (i.e. PPFs, NDTA, etc.), but not looking to add to team’s workload at the moment, going into peak season.

Answer:  Yes, we can include in peak season slides; however, it will be necessary to allow the new process to play out so customers have the appropriate time to provide input.  Would not expect to draw conclusions right off the bat.

Answer:  Remind the customer about the survey and encourage them to complete it. See our handouts on various timing.*

Answer:  No intent to lay out the process.  Would ask industry to remain focused on their service and the outcomes.  We’ll ensure the process is transparent; but industry’s focus should not be on process; it should be on how to provide quality capacity.

Answer: Members will receive a reminder link to previous incomplete surveys however, these are separate from the next survey in the series.  Each survey has its own independent reminders which may be sent concurrently as needed.

Answer:  We are confident this process is better for our customers and will provide better return rates than presently collected.  Our tests have already shown higher return rates—transition to the new process will need time to play out; so not looking to make rapid changes.  As we have done in other areas, we will take the appropriate time to collect and review the data appropriately.

Answer:  We do not expect a lower response using this process; however, if this were to occur we would use existing processes and rules, which do not include a reduction in MPS.

If you aren’t familiar with the scope of the new CSS process, or have additional questions, please let me know.