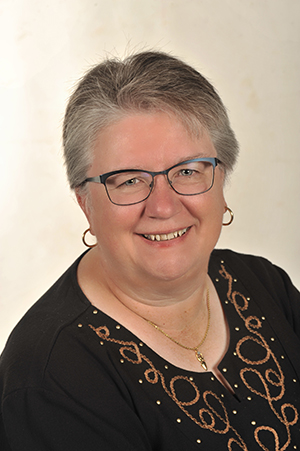 Margaret (Peg) Wilken began her work in the moving industry in July of 1981 as an executive secretary at Stevens Worldwide Van Lines. Prior to that, Peg had worked as a legal secretary and legal assistant at various law firms in Saginaw, Michigan, and at an LTL freight company, Branch Motor Express, for three years. At Stevens, Peg quickly found her niche working in the Government Traffic Department and was subsequently named Agency Director in 1984. Peg was promoted to Vice President of Government Traffic in 1999, a position she held for 18 years until 2017, when she was named Vice President of Risk, Safety & Claims. In 2003, Peg was also the first woman named to the Executive Management Team at Stevens.

In her various roles at Stevens, Peg has been responsible for solicitation of agents to represent Stevens for military business, as well as management of all of Stevens domestic military business and GSA administrative management. Peg also took over management of the claims department in the early 2000s. In these military and claims roles, Peg proved her ability to analyze difficult situations and articulate solutions, becoming a strong advocate on the national scene not only for Stevens but for the entire moving industry.

Over the years, Peg has served on the AMSA claims and government traffic committees, including a three-year term as chairwoman of the latter. She also served on the IAM government traffic and claims committees. Peg was elected to the IAM Executive Committee in 2009. She was elected as Vice Chair of the IAM Executive Committee in 2010, and then became only the second woman ever elected as Chair in 2014—a position she held through 2017.

Peg’s passion has been to find common ground on divisive topics between the industry and DOD, and within the various industry committees on which she served. She has always tried to find the best way to help express the moving industry’s issues and concerns to the Department of Defense and GSA, and to assure the best service possible to military men and women and government employees as they move around the world.

Peg participated for many years in various working groups created to re-engineer the DOD household goods program, ultimately resulting in DP3. For years following, she worked to refine the rules and processes of DP3 to make it serve the military customer better. As an advocate for the industry, one of the things Peg is most proud of is her efforts while on the IAM board to overturn the DOD’s ability to collect unearned transportation charges once full replacement value became the underlying liability principle of the program. She helped the industry in its successful court battle on this issue to save millions of dollars in claims that would certainly have been imposed by the services, on the premise that paying replacement value for goods at destination entitled the service provider to compensation for transportation provided.

Peg has been lovingly supported by her family during her working career. She married her partner of 37 years, Terry Moon, in 2015, and they have two daughters, Kathleen (Katie) and Claire. Peg is a native of Saginaw, Michigan, the middle child of the 7 children of Donald & Mary Wilken, who are now both deceased. Her parents and brothers and sisters have also always been a central part of her life.

In her spare time, besides spending time with her family, Peg was the choir director at St. Andrew Catholic Church from 1972 to 2014. She now belongs to Saginaw’s First United Methodist Church, participating regularly in their choir and occasionally playing guitar or piano in Sunday services. As Peg approaches retirement, she hopes to spend more time volunteering there and with other local charitable organizations in the Saginaw area, such as the Ecumenical Food Pantry, which was founded by her mother in the early 1970s. This organization provides food to thousands of poor and needy families each year, and is often the recipient of food collected through the Move for Hunger program.

Peg is very proud of her many years of work in the moving industry and feels truly blessed to have worked and made friends with people from around the world.