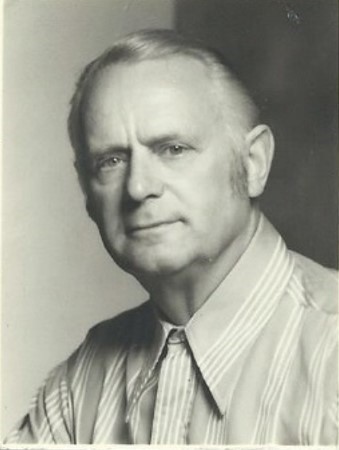 Hans Gerzymisch was born in Berlin, Germany, on March 9, 1908 as one of eight children. He was married and raised four children. In 1929, at the age of 21 years, he purchased a motorcycle with a side-car and started transporting ladders and paint buckets. That was his start in the transportation business.

By the time World War II stated in 1939, he already had built a trucking company with quite a number of trucks. The German Government assigned him to haul food from farms to parts of Berlin. Almost all other trucking companies in those years were used to support the war effort/troops, which in effect put them out of business.

In 1945, at the end of WWII, Hans used his last remaining truck and fled the soviet sector of Berlin to a town in Westphalia, Germany, together with his family and those belongings he could fit on the truck. There he started a new terminal, hauling imported tobacco from the port of Bremen to the cigar factories in the area.

In the early 1950s he moved the headquarters of his company to the small town of Schwetzingen, just outside Heidelberg, where the headquarters of the U.S. occupation forces was, and he started moving military families in addition to his trucking business. His experience in moving U.S. military families led directly to Ralph Johnson of Vanpac Carriers selecting him as the General Agent for Vanpac Carriers. Towards the end of the 1950s, the Military Traffic Defense Service Department (MTMS) agreed to give Vanpac Carriers a six-month trial of new door-to-door household goods service between the U.S. and Germany. Hans, as general agent for Vanpac Carriers, was in charge of overseeing the test in Germany and make it successful. Thus was the new door-to-door service born, now known as Code 4, greatly reducing transit times and claims when moving military household goods.

Besides being instrumental in convincing the MTMS that the new door-to-door system for household goods was definitely superior to the old van-sea-van system, Hans was also instrumental in getting the door-to-door freight system between the United States and Europe started. His company hauled the first ever 40-foot steel container loaded with grapefruit from Florida (Southern Railway Containerized Freight) from Antwerp, Belgium, to various cities in Germany in 1965. This test was sponsored by the USDA and proved very successful in regard to transit-times, claims, etc. That same year, his company also shipped a German-built/canvas-covered semi-trailer loaded with Vanpac door-to-door household goods containers to the United States.

In 1974, Hans renamed his company ITO – International Transport Organisation. When he decided to retire in 1979, he sold the entire business to Georg Koenigsmann, Sr., his manager for the terminals in Bremen and Bremerhaven. Hans died on December 5, 1987, at the age of 79.